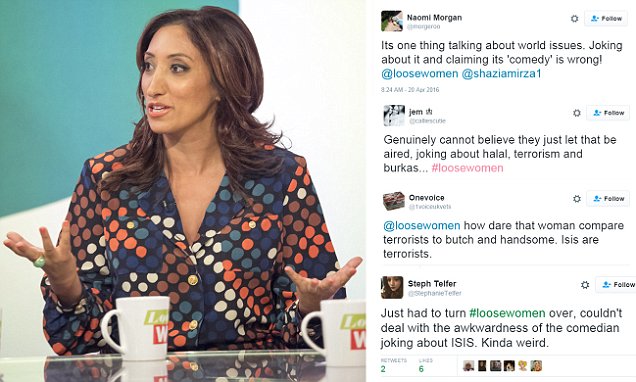 The Muslim Comic, who appeared on the revered women’s talk-show, made a series of quips about the terrorist organization, as well as her experiences being a Muslim woman in stand-up-comedy.

Mirza added her new tour – The Kardashians Made Me Do It – is based upon the topic of Jihadi brides and is her most laugh-worthy to date.

But the comedian drew complaints when she quipped about teenage Muslim girls leaving Britain to join Isis.

She said: “I’m not being frivolous, these ISIS men, as barbaric as they are… hot.”

She later added: “I’m more scared of my dad than ISIS,” and claimed her mum wore a burka because she “doesn’t want to be seen with my dad.”

Despite being in jest, her appearance on the regular morning talk-show provoked a reaction from some viewers.

“I love your show but glorifying this woman making jokes about ISIS and terrorism is disgusting,” tweeted one furious viewer.

Another added: “Just had to turn @loosewomen over, couldn’t deal with the awkwardness of the comedian joking about ISIS. Kinda WEIRD.”

However, some viewers found her to be quite funny, with one viewer writing: “Honestly think this woman is amazing. #Loosewomen.”

Another added: “I thought she was funny too. I could see her being on #TheLastLeg #ShaziaMirza.”