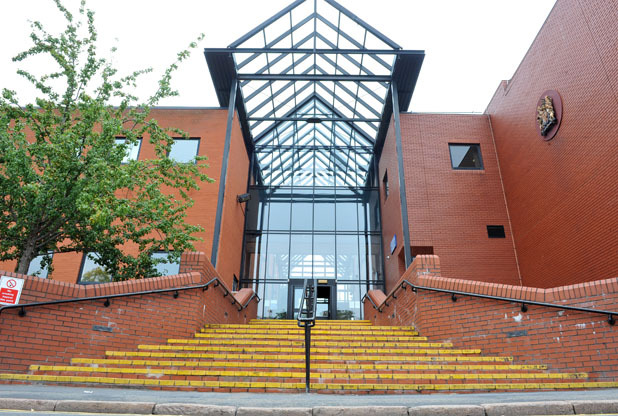 A husband, who stabbed his wife in a fit of rage, has been imprisoned for six and a half years.

Bharat Patel, 51, admitted to wounding Taruna Patel with intent in the knife attack which took place in their family home in Sywell Avenue, Loughborough.

The accountant at Loughborough University embedded the knife up to the hilt in his wife’s side whilst she was sitting to make sweets for Diwali during a row over her intention to travel to India for Christmas.

A dazed Patel told police officers:
“I just lost it.”

The stabbing followed an attack in which Patel hit his wife over the head with a wine bottle, witnessed by the couple’s teenage daughter.

Taruna, 28, urged the 15-year-old to call for the police before the stabbing took place.

Patel, who seemed dazed, told the police when they arrived: “I just lost it.”

The officers found Taruna bleeding on the floor with the knife stuck in her side, the blade having penetrated her ribs, left both lungs punctured and cut into the atrium of the heart.

She was treated at the scene by paramedics and underwent emergency surgery at Nottingham’s Queen’s Medical Centre to have the knife removed.

The blade … penetrated her ribs, left both lungs punctured and cut into the atrium of the heart.

The couple, whose arranged marriage had broken down when the attack took place, were in the process of separating.

Judge Nicholas Dean QC at Leicester Crown Court said: “It seems you are remorseful and I observe your demeanour.

“Whatever the stresses and strains you suffered at work, whatever pressures there were within your marriage, this shouldn’t have happened.

“It was bad enough to strike your wife over the head with a bottle in front of your daughter.

“You proceeded to stab her deliberately with the knife which penetrated her ribs, lungs and touched the heart.

“It’s only good fortune she wasn’t killed by your actions.

“The effects upon her will continue to be profound.

“It will be a long time before she regains the confidence she’s entitled to, to enjoy her life, and for your children to come to terms with what you’ve done.”

Mary Prior, mitigating, said: “He was a chartered accountant at Loughborough University, managing five members of staff and a turnover of £100 million.

“There was a history of domestic violence for a few years when they argued and he has, on occasions, slapped her.

“In 2014 he was cautioned for punching her once on the face, which caused a nasty bruise.

“There’s never been any suggestion that he’s been anything other than a good and loving father.

“His wife wanted to go to India at a time when he couldn’t take time off work to care for the children when they were off school.

“It caused him to ‘lose it’ and hit her and then stab her.

“It’s something he will regret every day of his life but that won’t be any comfort to the victim or his daughter who saw her father hit her mother over the head with a bottle.”