The former leader of the British National Party, Nick Griffin, has been expelled following allegations of harassment of members and having lied about the BNP’s top officials.

Mr Griffin, 55, was found guilty of a number of offences in an investigation by a party conduct committee which said in a statement that Mr Griffin had been “trying to cause disunity by deliberately fabricating a state of crisis” in the party. 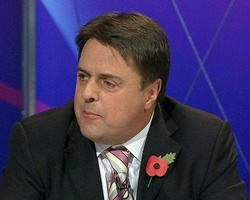 Released on Wednesday evening, the statement accused Mr Griffin of spreading “damaging and defamatory allegations” via the internet and besmirching the party’s image “through public statements” and bringing it into disrepute.

In addition to these charges, the BNP statement identified Mr Griffin, who stood down as party leader in July, to have disobeyed his successor, Adam Walker, and also found the former head guilty of “harassing members of BNP staff and in at least one case making physical threats”.

Mr Griffin, who led the party for 15 years, turned to social media to voice his defence and rejection of the committee’s findings, he claimed via Twitter that his expulsion, which he described as “plastic gangster games”, had been “without trial” and for calling a fellow party member a “useless, lazy tw*t”.

The ex-head of the BNP became honorary president of the far-right party upon resigning as leader after losing his seat in the European Parliament in May and declaring bankruptcy, resultant of legal bills related to a number of court cases.


A spokesman for the party said: “”This has been a difficult decision to make and not one taken lightly.


“Although we all appreciate that Nick has achieved a lot for our party in the past, we must also remember that the party is bigger than any individual.

“Nick did not adjust well to being given the honorary title of President and it soon became obvious that he was unable to work as an equal member of the team and alarmingly his behaviour became more erratic and disruptive.”