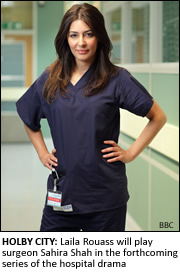 LAILA Rouass is to join the cast of Holby City as new regular character, brilliant surgeon Sahira Shah.
The actress has already started filming with the Holby City team and will be seen on screen in February 2011.
Best known for her roles in Primeval and Footballers’ Wives, Laila has already appeared on the BBC in Doctor Who and recently in the spy drama Spooks.
Speaking about her new role she said: “I’m over the moon to be joining the cast of Holby and am enjoying bringing the character of Sahira Shah to life. Like me, Sahira is a mum so I can totally relate to the struggles she faces balancing motherhood with her working life.
“I have no medical knowledge whatsoever so playing a surgeon on Holby has been a real eye opener! All the cast have made me feel so at home already and I’m looking forward to getting stuck into some juicy storylines.”
Executive producer Belinda Campbell said the actress had brought a “fresh new energy” to Holby City.
“Her character has been a joy to create. Like many women in 2010, Sahira tries her best to maintain the delicate balance between work and home life,” she said.
“While on the surface she appears to be cool and calm, underneath it all, she is kicking madly just to keep afloat. It will be fascinating to explore what is really going on underneath the façade of perfection Sahira has created for herself. I’m sure her character will be someone a lot of viewers will recognise in themselves.”
Laila’s storylines will see her character compete against Jac Naylor (Rosie Marcel) for the mantle of top dog at Holby – will she succeed in a challenge everyone else has so far failed? Sahira’s dark history with the man who has guided her career, the mysterious Hanssen (Guy Henry) will be revealed and viewers will see the apparently happily married Sahira trying to resist the growing spark between her and Greg Douglas (Edward MacLiam).