Home Features Marriage made on the Net

SingleMuslim celebrates 10 years at the top 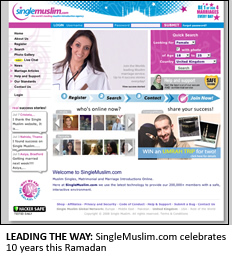 SingleMuslim, one of the world’s leading online matrimonial agencies for the Muslim community has extra reasons to celebrate this Ramadan – it’s celebrating its ten year anniversary!
That’s 10 years in which the company has brought about 10,000 marriages.
Around half of the site’s users are British Muslims, meaning that ten percent of the UK’s two million Muslims are registered with SingleMuslim.com, and the site receives over 20,000 unique visits every day.

Founder and Managing Director Adeem Younis came up with the idea for SingleMuslim.com when he was just 19 and at university. Many of his male friends had already completed their education, had professional qualifications, and came from good families, but were unable to meet suitable marriage partners. Adeem recognised that Muslim males and females tended to stay in their separate groups, so opportunities to get to know each other socially were limited.

Adeem said: “As a web designer, I found myself becoming increasingly preoccupied with trying to develop a modern solution for that age-old problem: how to find a way for Muslims to meet potential partners in an Islamically safe environment?
“Marriage is extremely important in Islam – it completes our faith – so I started to wonder whether there were any unexplored avenues that might provide a solution. And that’s when I had the idea for SingleMuslim.com.”

On 1st August 2000, Adeem launched the website from his small office, above a fast food shop in Wakefield, West Yorkshire. Friends and contacts in the local community helped the venture to get off the ground, offering support with website development, photography, and other essentials.

“Although I, and the friends who’d helped me get so far, had pretty low expectations of how the site would be received, it was still a great moment when we pushed the button and announced SingleMuslim.com to the world”, said Adeem.


The company’s biggest challenge was encouraging the Muslim community to accept SingleMuslim.com as a viable, safe and halal facility that could complement the more traditional methods of finding prospective marriage partners. Many in the Muslim community still view the Internet as an unsafe, inappropriate environment, and some believe that those who use the Internet to find a partner are, in some ways, less devout than Muslims who use only the ‘tried and tested’ traditional approaches.

“We fully expected to encounter scepticism and resistance from day one,” said Adeem. “Marriage is an extremely important part of our faith and there can be a lot of pressure to find a ‘good match’, whether through arranged marriages or not. In turn, weddings are one of the most important occasions in Muslim life. Tradition is so important within our culture, so encouraging Muslims to consider the Internet as a means of finding a marriage partner was always going to be a challenge.”

No wonder, then, that the company takes so much time to reassure people that the site is run by Muslims, for Muslims, and for the sole purpose of helping users to find a marriage partner.

SingleMuslim.com takes a zero-tolerance approach to inappropriate behaviour, enabling it to create a modern, totally safe, Islamically sound environment. All user profiles are vetted by members of the SingleMuslim team, not by a computer, so users can be confident that all the profiles and photos they see are genuine.

Currently, there is a 2:1 ratio of men to women using the website, which reflects some of the lingering cultural perceptions of using the Internet to find a marriage partner. But the number of women registering with SingleMuslim.com is on the increase. “The ratio used to be 6:1,” said Adeem, “so we started offering complimentary Gold Membership to women.  Culturally, it is a bigger step for women to join something like SingleMuslim.com, and we wanted to do something to make their decision a little easier.” 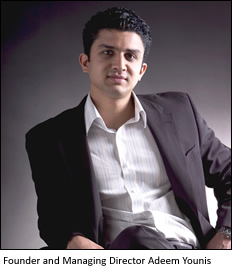 The benefit of experience


SingleMuslim.com’s ten years at the top is the result of hard work, determination, and a professional approach to business. The company now has a reputation for its reliability, discretion and sound Islamic principles, and has earned the trust of the Muslim community.

In part, this is because the company advises members to involve their family at every stage of the process. Adeem said: “Our members are often surprised by how much they can benefit from the advice, knowledge and experience of their families, even in this sort of virtual environment.  It’s also good to have your family around if you’re using the LiveChat facility; they can see the sort of person you’re ‘talking’ to online, and gauge for themselves whether or not they’ll be a good match.”

“Above all, be open minded about what to expect from SingleMuslim.com. The website doesn’t differentiate profiles by caste or sect – we believe that piousness should be the most important characteristic, not what class they belong to. We know that countless people meet on Singlemuslim.com who would ordinarily never have the opportunity to meet in the normal course of their lives.

“That’s one of the things I’m most proud of, and it’s the real beauty of SingleMuslim.com.”


In the early days, Adeem would hand out leaflets promoting the site at Muslim events, and was never sure how they would be received. He said: “There was one time when I thought our leaflets had got us into trouble. I was handing them out at a Mosque after a visit from an Islamic scholar. The Mosque was packed out and we must have distributed hundreds of flyers. Then someone asked “who was responsible for SingleMuslim.com” a friend pointed me out. To be honest, I thought he was going to tell-me-off for running the website.

“I couldn’t have been more wrong! It turned out that he had met his wife on the website and he wanted to thank me. That was just six months after we’d set up the site, so it was an incredibly rewarding moment for me, and it repaid a lot of my faith in what I was trying to achieve. Since then, I’ve never looked back.”

By the end of 2002, the site had over 10,000 registered users registered. Friends and family were even starting to ask Adeem to be a ‘matchmaker’ for their own children. But it wasn’t just friends and family who were sitting up and taking notice. In 2003, at the age of just 22, Adeem was regional finalist in the Yorkshire and Humber Shell Livewire Young Entrepreneur awards and the subsequent local, national and international media coverage drove more traffic to SingleMuslim.com.

By June 2005 there were over 50,000 active accounts on the website, and just eighteen months later SingleMuslim.com welcomed its 100,000th user. There are now over 500,000 members, and 500 new accounts are created every day.


After the first matrimonial success in 2000, the site’s users began reporting marriages on a weekly basis, with many sending in letters and photos in gratitude. Incredibly, for the last three years, SingleMuslim.com has learned of an average of four new marriages every day, and the company is now hearing about the babies that many of the marriages have been blessed with. “It is amazing to think that so many people have married and are now bringing new lives into the world as a direct result of an idea I had ten years ago” admits Adeem, “and it is always a genuine pleasure when someone comes up to me to say that they or their friends have married as a result of SingleMuslim.com.”

The number of marriages brought about by SingleMuslim.com is likely to be significantly higher than the 10,000 the company is aware of. Many users do not like to share their success – despite the offer of free Umrah trips to the Holy Land for those who to share their stories – and many do not feel comfortable admitting publicly that they used a website to find their marriage partner.

Adeem says, “We respect our users’ wishes and right to privacy. The fact that more and more couples are willing to share their success stories with us and the users of the site shows that the stigma within the Muslim community about using the Internet has definitely reduced.”