Vic Motune reports on the successes of the Reaching Out project 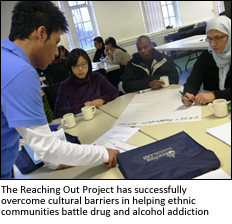 CULTURAL issues can stand in the way of families getting the help they need for drug and alcohol problems. Vic Motune reports on the Reaching Out project’s success in overcoming them through building trust in the community.
It’s not often you hear about a Muslim family in which a daughter is physically abusive towards her mother and steals money from her. But for 48-year-old Saira (not her real name), a mother of four from Manchester, this was a situation that had endured for five years after her 21-year-old daughter began using cannabis and cocaine.
Because of the respect given to parents and grandparents in the tightly knit
Muslim community in which she lived, Saira kept quiet about the abuse. She knew that if she spoke about it her daughter would be shamed and ostracised by friends and neighbours. However her main concern was that her daughter got the help she needed to end her drug dependency and become part of the family unit again.
Not having a good command of English and knowing little about where to find drug treatment services, the violence continued. It was only when she heard about the Manchester-based Reaching Out project that the situation began to change for the better.
Reaching Out is a pioneering multi-faceted project aimed at raising awareness about, and treating, substance misuse in black and minority ethnic (BME) communities. It’s long been claimed by BME service users and campaign groups that they face considerable barriers in getting the help they need to tackle substance misuse.
Often-cited issues include eurocentric treatment approaches which ignore the role that family and community play in the lives of those who need help, poor awareness of local drug and alcohol treatment services, and the reluctance of individuals who need help to ask for it, either for cultural and religious reasons or fear that their immigration status may be compromised. And since the publication of a 2007 report from the London Drug and Alcohol Network, which found that people from minority ethnic communities across the country are not getting the help they need, critics of drug rehabilitation programmes say not much has changed.
The Reaching Out project aims to tackle many of these issues by using a community focused multi ethnic partnership approach. Although a number of outreach programmes have been established around the country over the last five years aimed at specific ethnic groups, central to the concept of Reaching Out is that community organisations themselves are often better placed than service providers to gain access to their communities, build trust and create awareness about drug and alcohol use.
Also central to the Reaching Out model is that without community involvement, knowledge and practice cannot become embedded beyond the life of the project.
Reaching Out targets seven key groups in the Greater Manchester region, which include the Chinese, Pakistani, Bangladeshi, African, Caribbean, Somali and Kurdish communities. 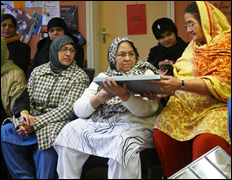 ‘We work with the key organisation in each community,’ says Reaching Out’s coordinator, Jawad Mahboob. ‘Each organisation nominates someone to be trained up to deliver awareness and education sessions and also to screen and refer anyone who they think has a drug or alcohol problem, as well as providing culturally relevant moral support.
‘It’s a really important approach because drug misuse problems are different for each community. For example, a big issue with the Somali community in Manchester is the use of khat. Other south Asian communities are having to face issues such as increasing cannabis use, so sessions are individually tailored, rather than a one size fits all approach. This approach is also important because people feel there isn’t any kind of programme available for them.
‘They may be aware of outreach programmes around other areas of health such as diabetes or asthma, but are very often not aware of help that is available for drug and alcohol addiction. That maybe down to the fact that drug use is a touchy subject. Some BME communities feel they don’t have a drug problem, that issues with drugs are going on elsewhere and as a result problems in their midst are often not talked about.’
Adds Mahboob: ‘It’s this approach that enabled us to help people like Saira.
When she heard about Reaching Out she was desperate to get help for her herself and her daughter. However, she had struggled to find that help because her English was poor, making it difficult to access certain services. When she came to us, we did her assessment in Urdu which helped us to understand her cultural and religious issues so that we could support her as best we could. Because domestic violence was involved, we had to refer her to a number of other services to ensure both she and her other children got the support they needed.
‘At the same time, we’re looking at securing the kind of treatment her daughter needs to help her kick her drug habit. If Saira hadn’t contacted Reaching Out, which she’d heard about through our community networks, she would have continued to endure violence at the hands of her daughter.’
Reaching Out was inspired by research studies undertaken in 2006 by BME community organisations as part of the University of Central Lancashire (Uclan)’s Community Engagement Programme. The studies looked into the treatment needs of black and minority ethnic communities in Manchester and revealed a distinct lack of knowledge about drugs and alcohol among these communities. There was also a lack of culturally-relevant services in the city to help people from these communities with substance misuse issues.
The Reaching Out project was launched later that year as part of the city’s Black
Health Agency, and funded by the Manchester Drug and Alcohol Action Team. The original idea was to use outreach workers to target these communities. However, with Mahboob’s appointment in 2008, the project adopted a new community-led approach – and it is one that has seen remarkable results.
According to a recent evaluation of the project by Manchester Drug and Race
Unit, 75 per cent of people from the local community organisations who received training said it was the first time they had received any information about drug and alcohol issues. More than a third of those trained said they had passed information on to friends and family members. Several people suggested they had altered their own substance-using behaviour as a result of the training.
‘The idea to adopt a community-led approach was about us asking ourselves “how do we become more effective in getting across information and help about substance misuse?”’ says Mahboob. ‘Leading members of the organisations we worked with felt that it was impossible to get people from their own areas who had drug problems into treatment if they themselves were not aware of what treatment services actually do or what the issues were. It’s especially important when we’re delivering sessions to women or mothers because they become really keen to get that message across to their children, their husbands or other family members.
‘But another great benefit of the Reaching Out model is that we’re able to gain lots of intelligence from the grassroots organisations we work with, which informs what we do at a strategic level and it enables us to better inform decision makers, service providers and funding bodies in the north west about real issues and problems they may be unaware of.’
The success of this approach has been complemented by a newly launched telephone helpline. Mahboob coordinates the helpline with a team of five staff members from the Manchester Drug and Race Unit who are trained to deal with helpline calls.
‘Because there is still a taboo around drug use, people can be anxious and hesitant about approaching their community centres,’ he says. ‘In many cases they worry about confidentiality. The advantage of the helpline is that they don’t know the person on the other side of the phone, which allows them to be open and honest about what is happening. When somebody rings, we have a spreadsheet on which we log the name of the caller, their ethnic background and a short description of exactly what the call is about, and from there we provide advice and information.
What we often find is that there may be a related issue around domestic violence or parenting, so we have a national database of contacts that we can refer them to.’
If you would like to speak to the Reaching Out Project you can call in confience on 0161 232 5396 Monday to Friday 10 – 5pm.