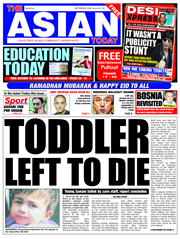 FROM Nick Griffin’s Question Time appearance to Slumdog Millionaire’s Oscar riches – we bring you a rundown of all the major news stories that made the pages of The Asian Today in 2009.
JANUARY
Top Story: Details of how a young defenceless girl died in agony at the hands of her mother and mother’s boyfriend were played out in a shocked courtroom at the beginning of the year. Two-year-old Sanam Navsarka died following months of abuse that resulted in over 100 injuries to her frail body. Sanam’s mother, Zahbeena Navsarka and her boyfriend, Subhan Anwar were charged with murder. Both pleaded not guilty.
Other News: In other news this month Faria Khan was jailed for 20 years for hiring and paying a group of aspiring rappers £100 to murder her estranged husband, Nawajid Khan. The UK’s first feature film on honour killings is premiered in Birmingham and British director Danny Boyle’s ‘Slumdog Millionaire’ is nominated for an amazing 8 Academy Awards having already swept the board at the Golden Globes.
FEBRUARY
Top Story: What a night at the Oscars for Britain! Slumdog Millionaire stuns the movie world; winning eight Academy Awards in an amazing night at the Academy Awards. The film bags the big prizes of the night – Best Film and Best Director, while Indian composer A R Rahman secures his country’s first ever Academy Awards with two coveted Oscars.
Other News: An award-winning graffiti artist from Birmingham accuses West Midlands Police of bullying a city resident in allowing officials to paint over a pro-Gaza mural he created on the side of the residents home. The mural was one of four painted by Mohammed Ali across the city. He accused police of ‘harassing’ the family and frightening them into allowing council officials to remove it. In other news, Zahbeena Navsarka and Subhan Anwar are jailed following the death of two-year-old Sanam Navsarka. Zahbeena, Sanam’s mother is convicted of manslaughter and jailed for nine years. Her boyfriend, Subhan Anwar, is convicted of murder and jailed for 23 years.
MARCH
Top Story: A Birmingham father pleads to the British government for help in securing the release of his son who he claims has been tortured since being imprisoned in Pakistan four years ago. Naheem Hussain, 24, and another man, Rehan Zaman were jailed for murder in 2004 following a land dispute in the village of Ratta, Azad Kashmir. Naheem’s father, Fazal Hussain, said his son was falsely jailed for murder. His case, which is still ongoing, is being backed by human rights charity Reprieve.
Other News: The Crown Prosecution come under scrutiny after admitting blunders that led to the death of Sabina Akhtar. The 26-year-old was murdered by her abusive husband, Malik Manan, who was convicted and jailed for life. Despite plucking up the courage to finally report Manan to police following years of physical abuse, Sabina was left at the mercy of her husband after it emerged he was never charged. The CPS issued an apology to Sabina’s family over their handling of the case.
APRIL
Top Story: In the first case of its kind, a Blackburn woman is found guilty of treating her daughter-in-laws like ‘slaves’. Preston Crown Court is told Naseebah Bibi ‘exploited’ her three daughter-in-laws, abusing and beating them over a 14-year period. The trio, Tazeem Akhtar, Nisbah Akhtar and Nagina Akhtar, all from Pakistan, were made to sew clothes day and night, wash and clean windows in the freezing cold and were threatened if they went to the police.
Other News: In the Midlands a row over plans for a mosque in Lichfield finds its way onto social networking website Facebook where anti-Mosque residents voice their anger. The nature of some comments – deemed racist and threatening – are removed as the man behind the Mosque, Abdul Salem, urges calm from residents. 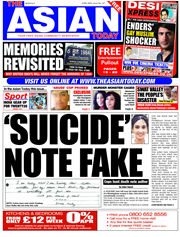 MAY
Top Story: Cops investigating the death of a Birmingham woman in a house fire in 2008 reveal a ‘suicide’ note left at the scene was a fake. Kuldeep Kaur Sidhu, 26, was found dead following a fire at her house in the Quinton area of the city. An emotional appeal by her family revealed Kuldeep was pregnant at the time of her death.
Other News: A man is jailed for life for the murder of two sisters who were found butchered in their city centre apartment. Mohammed Ali, described as a “monster” by detectives stabbed his girlfriend Yasmine Larbi-Cherif three times in the back and head before turning on her younger sister, Sabrina who was stabbed 35 times. In other news, BBC soap Eastenders introduces its first gay Muslim character.
JUNE
Top Story: Muslim groups react with fury after French President Nicolas Sarkozy proclaims the Burqa “is not welcome in France”. His comments are criticised by a number of Muslim authorities in France and around the world. In Britain the Muslim Council of Britain accused the President of “patronising and offending” the Muslim community.
Other News: Mahatma Gandhi comes to Leicester – a bronze statue of the inspirational leader that is! Hundreds flock to the Belgrave area of Leicester to see the unveiling of the statue. Even Gordon Brown makes a surprise visit! The years biggest entertainment story – the passing of music legend Michael Jackson – dominates the front pages of the world’s newspapers. 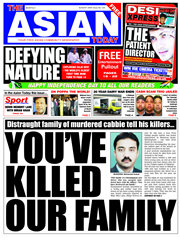 JULY
Top Story: Police begin a manhunt after a Birmingham taxi driver is found brutally murdered. Father-of-three, Mohammed Arshad, was stabbed in the head and left to die in the road as his killer fled. His heartbroken family tell The Asian Today their life has been ‘destroyed’.
Other News: A London man is jailed after stealing more than £600,000 from British Muslims under the pretence he was planning their Hajj pilgrimages. Mohammed Faruk Ahmed gambled the money before he was caught trying to flee the country. He was jailed for six years. In other news a groom, his father and mother, are jailed after trying to scam an insurance company over non-existent injuries. The trio claimed they had been injured when a coach carrying the wedding party had a minor crash. But a wedding video showed the trio dancing wildly!
AUGUST
Top Story: Birmingham city centre is brought to a standstill as anti-Muslim protestors from the English Defence League and protesters from Unite Against Fascism clash with police. Supporters from both groups run havoc in the second city as shoppers are forced to take cover. Police make more than 30 arrests and are later accused of playing down the racist nature of the anti-Muslim group, the EDL. The group continue with a number of protests across the country.
Other News: A report into the death of toddler Sanam Navsarka who died at the hands of her mother and her boyfriend hits out at the failure of social services at Kirkless Council. The report concludes that the young girl, who died with more than 100 injuries to her body, was failed by care staff and could have been saved if concerns about her welfare were reported. Government minister, Jim Fitzpatrick, faces calls to resign after he walks out of a Muslim wedding when he was asked to sit in a separate room from his wife.
SEPTEMBER
Top Story: Twenty-four years after Preston schoolboy Imraan Vohra disappeared as he made his way home from school, detectives make the vital breakthrough in catching his killer. The body of Imraan was found two days after he went missing in Avenham on 11 July 1985. A DNA sample left at the scene was finally matched to Robert Morley who lived in Avenham at the time of Imraan’s disappearance. Detectives say the chances of Morley, who died in 1997, not being responsible for Imraan’s murder were a billion to one.
Other News: The Sun newspaper admit they were duped by a ‘phoney terrorism’ after printing a front page story which claimed leading British Jews were being targeted by Islamic extremists. Sir Alan Sugar, who was pictured on the front page alongside the story, begins legal action against the newspaper.
OCTOBER
Top Story: BNP leader Nick Griffin is invited onto the BBC’s Question Time – prompting a wave of fury against the broadcaster. The BBC deny they are allowing Griffin a platform to peddle the party’s racist rhetoric. Griffin himself claims he has the support of British Hindu’s who react with anger to the comments. A collective statement released by the country’s leading Hindu organisations reject the claims saying they will never back the policies of the BNP.
Other News: Undercover BBC reporters are racially abused and attacked over 50 times in eight weeks on a Bristol estate. The Panorama programme exposes shocking levels of racism which exist in British society. In other news human rights charity Reprieve calls for the British government to intervene in the case of Akmal Sheikh who awaits execution in China after he was found guilty of heroin smuggling. Reprieve say Akmal is ‘mentally unstable’ and was duped into carrying the drugs haul. 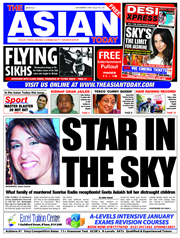 NOVEMBER
Top Story: A receptionist for London radio station Sunrise Radio is found brutally murdered in a London street. Geeta Aulakh, a mother-of-two, was found in Greenford just yards from her childminders home with severe head injuries. Her right hand had also been severed as she tried to defend herself. Police charge an 18-year-old man with murder just days after the killing.
Other News: In a first of its kind, Crimestoppers release a series of ‘Wanted’ posters across Pakistan in the hope of apprehending the final suspect in the murder of PC Sharon Beshenivsky. Piran Ditta Khan is believed to have fled to the country after the PC was shot dead in November 2005 following a botched armed robbery at Universal Travel Agents in Bradford.
DECEMBER
Top Story: Relations between the UK and China are at breaking point after Briton Akmal Sheikh is executed for drug smuggling in China just days after Christmas. Despite pleas from the British government, human rights charities and Akmal’s family, he is executed by lethal injection. British PM Gordon Brown says he is “appalled” by the decision but Chinese authorities warn Britain against criticising its judicial process.
Other News: In the other major story in December a father is jailed for life for the murder of his daughter in an honour killing over ten years. Despite the body of Tulay Goren, 15, remaining undiscovered, her father Mehmet Goren is convicted of her murder. Tulay’s mother and sister provide damning evidence at the Old Bailey against her father and he is jailed for life.