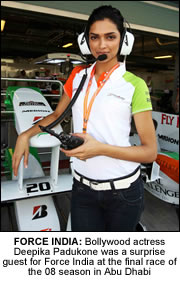 BOLLYWOOD actress Deepika Padukone believes the growing success of the Force India Formula 1 team can challenge cricket as the country’s number one sport.
While her Bollywood counterparts flock towards the lure of cricket’s Twenty20 game, Deepika prefers to stay in the fast lane that is Formula 1.
The 23-year-old actress was a surprise guest at Force India in Abu Dhabi earlier this month in the final race of the season.
She cheered on the Force India team who gained their first podium finish earlier on in the season at the Belgium grand prix in August.
While many sports enthusiasts are in agreement over Force India’s gradual improvement, Deepika said it was refreshing to see the country make ground in a sport that is considered “not an Indian thing.”
“It gives me a sense of supreme pride to be part of India’s team at the pinnacle of motorsport and see the Indian tricolour race on this world class race track”, the actress said.
“The whole team has to be applauded for all the success, but overall they have set an example that we are capable of achieving of things which was considered as not an Indian thing. It’s a refreshing change to see India get into a complete different stratosphere of sphere apart from Cricket.”
India is scheduled to host their first ever grand prix in 2011.