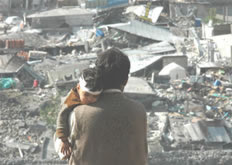 For Abdul Hameed, the scars of last October’s devastating earthquake in Pakistan which claimed more than 73,000 lives have yet to be healed.
Like many others, he was one of many who rushed to the devastated parts of Pakistani-administered Kashmir in a desperate bid to help. In the city of Rawalpindi at the time of the quake, he was alerted to the disaster through vague and sketchy news reports on Pakistani television. His decision to drive to the affected areas was instant but he wasn’t prepared for what lay ahead. What he saw, he told The Asian Today, was beyond belief. Scores of lifeless bodies, piles of rubble which were once houses and utter chaos as people searched aimlessly for loved ones. A year on from the devastation and Abdul is still trying to help the victims of the earthquake. Through Birmingham charity Real Help, he and others from the city continue in their work to bring about a better existence for the victims.
In this special feature we speak to three Birmingham men who have spent the last year of their lives dedicated to helping their Muslim brothers and sisters millions of miles away.

You can say Abdul Hameed was one of the lucky one’s. His uncle and sister-in-law lived in the earthquake affected Rawalkot but escaped with only damage to their homes. Others were less fortunate as Abdul explained. “Roads into the affected areas were terrible which meant our journey took longer than expected”, he told The Asian Today.

“We drove from village to village all the while seeing the same scenes being played out before our very eyes. There were people searching for loved ones, children with appalling injuries and dead bodies being dragged out from beneath piles of rubble. In Bagh we witnessed one of the most horrifying scenes I have ever seen. A local school which had almost 300 children registered had practically disappeared. Locals told me it had taken the full brunt of the earthquake and had collapsed with all children inside. There were schoolbags scattered around a number of dead bodies. It was a terrifying sight”.
Through a charity based in the Lozells area of Birmingham, Abdul began co-ordinating the distribution of essential relief items to the affected areas. Charity Real Help had only been running for two years prior to last October’s earthquake but were well-equipped to deal with the task at hand. They already had representatives in Pakistan undergoing food and medical projects before the earthquake struck and thanks to this bit of fortune, the charity’s relief effort began almost instantly.
“Along with representatives of Real Help we went out and met survivors, giving them items such as flour, sugar, ghee and most importantly tents”, Abdul said. “As we drove from village to village distributing what we had, we encountered the same scenes. People were frantic and didn’t know where to turn. We did what we could in offering them something but we knew no amount of food or tents could take away their pain”.
While Abdul was able to get to the devastated areas within days, thousands of British-Pakistani’s across the Midlands could only pray and hope their relatives had escaped the full force of the earthquake. In the days that followed, tens of thousands of British Asian’s boarded planes to Pakistan. For some there was a need to make sure relatives were ok, but for others a sense of duty in helping their fellow Muslim brothers and sisters.

Shabbir Begg, owner of Kafe Lahore, a take-away in one of Birmingham’s most populated Asian areas and Rafaqat Hussain were two British Asians who felt the urge to do more than donate money for the relief effort.

They both flew out to Pakistan in the hope to help as much as they physically and financially could. “There were hundreds of people who had lost their livelihoods, family members and everything they had spent their whole lives working for”, Shabbir Begg told The Asian Today. “Most of the villages we went to were completely destroyed”, he added. “One village we visited had at one point up to 70 houses. After the earthquake none were standing. The village was all but empty apart from this one woman. She was 80 years old and was completely alone. Her family had been killed and she had nothing. As a Muslim going to Pakistan was a necessity for me because I felt it was my duty to help my fellow Muslim brothers and sisters”.
The two men’s journey to Pakistan was made possible by Real Help. It is just one of hundreds of charities across the UK who have organised masses of fundraising events in aid of the victims of the earthquake. While the charity worked tirelessly in the weeks and months after the disaster, Real Help representative Mohammed Jameel stressed their work in the area would never come to an end.
“In the aftermath of the disaster, Real Help began raising funds in order to do a number of things”, he said, “One of then was to get as much food, shelter and clothing to the survivors. Alongside this work we helped to construct Mosques as well as rebuild houses. Over the past year we’ve established a school giving hundreds of young kid’s access to education as well as recruiting for teaching positions within the local area to give them a chance to get back on their feet and rebuild their lives. “Organisations like Real Help have donated money and set up projects over the past 12 months and will continue to do so. We need to offer financial as well as emotional support to the victims. They need to know that they aren’t alone and that they can rely on us to help them through this difficult time no matter how far away we are.”
Coming up to the anniversary of the disaster, Real Help, who have previously helped raise funds for the victims of the Middle East crisis, as well as organising fundraising events in aid of Birmingham’s Tornado appeal, have representatives working in Pakistan. Local policeman Tariq Hussain who flew out to Pakistan in the aftermath of the earthquake is currently helping set up and monitor new projects made possible by Real Help.
But while charities like Real Help and individuals like Abdul, Shabbir and Rafaqat have done what they can to help the victims, there is an air of resentment towards the efforts of the Pakistan government over the past year.
Despite a sustained effort by organizations and individuals over the past year, thousands of survivors still find themselves facing the winter months living in makeshift tents in hundreds of temporary camps set up last year.
In the district of Bagh, where 8,658 people died and 11,369 were injured, 96 per cent of its people are living in temporary shelters. While in Muzaffarabad scores of relief tents can be seen for miles.

For Mohammed Jameel, the government’s lack of work is “disappointing”.

“It is rather disappointing that a lot of money has been committed to the Pakistan government for the earthquake appeal but you hear stories that people still haven’t been given any financial support in the rebuilding of their homes. We haven’t seen the infrastructure to begin the rebuilding process put into place and by now that is very disappointing. By now I would’ve expected the government to have marked out some major areas so that the people can at least see progress happening. I’m worrying about it because winter is fast approaching and if the government hasn’t done much already then it will be very hard for those still living in temporary shelters.”
He adds these concerns are also being highlighted by the survivors themselves. “Our representatives in Pakistan are constantly being told by the survivors that the government should be doing more. We have heard that there are many people who have had no contact with the Pakistan government at all. Internationally Muslims have donated a lot of money but it hasn’t reached the people in some of the very remote areas.”
While many predict it could take another five years for the earthquake-affected region to regain some of the normalcy it enjoyed prior to the earthquake, for others the emotional scars of the survivors will never heal.
Through Real Help, Abdul, Shabbir and Rafaqat all plan to make another journey to Pakistan. For them there is hope that the survivors will finally end their suffering and be at peace once again. For those people in Pakistan, there is the comfort that organizations like Real Help and individuals like the Abdul, Shabbir and Rafaqat are just four of many that are still working tirelessly to help give them that life they so desperately crave.
By Zakia Yousaf & Ajmal Hanif