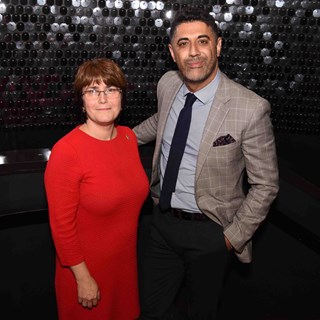 Asian Business Chamber of Commerce (ABCC) patrons were inspired to “be bold, be brave, be empathetic” at a recent patrons dinner.

Patrons of the Chamber, including West Midland Reserve Forces and Cadets Association, Mazars, Edgbaston, Aston University, FBC Manby Bowdler, RBS and South and City College, attended the event held and sponsored at Malmaison in the Mailbox.

Guests heard from president Qasim Majid, who described the transformation happening in Birmingham.

He said: “You can see the transformation that is happening in Birmingham right now, but most importantly you can feel it.

“You can feel that Birmingham is happening right now.

He also discussed the core strengths of Birmingham being its young and diverse population, and how larger businesses may be able to learn from small businesses regarding diversity in leadership.

“Our diversity policy is not by design, it’s a natural selection – the right people for the job.

“But I am preaching to the converted, it’s how we get the message out of this city and beyond the region to really sing the praises of Birmingham to the world not just UK wide.

He ended his speech with a simple message to attendees that resonated throughout the event, “be bold, be brave, be empathetic.”

He said: “We are all in this together, and I think if we are brave, bold and empathetic we can make for a much better community.”

Dawn Baxendale, chief executive of Birmingham City Council, also spoke to guests and reflected on her new role in the council and her relationship with the city.

Originally from Huddersfield, Ms Baxendale has a 25 year career in local government, most recently at Southampton City Council as their chief executive before moving to Birmingham City Council. She has worked at the European Commission in Brussels and the World Bank.

She previously visited Birmingham in the 1980s, and recounted to guests how her opinion on the city had changed when she visited in 2016.

She said: “I came here in 2016, to a local government association national conference.

“I walked around and my jaw hit the floor, I could not believe what I was seeing. Because outside of Birmingham that bit about reputation still lingers, about a place that is still lagging behind and not a place you want to be.

“However the opportunities here are immense. The economic fundamentals are better here than in Greater Manchester.

“In terms of SME growth, in the last seven years and especially in the last year, are better than London.

“You’ve only got to walk around the city to see what is happening, and literally every week the skyline is changing. That is a phenomenally exciting place to be.

She described the power of the young population in Birmingham, the ongoing improvement of the skills agenda, the opportunities the Commonwealth Games will bring to the region, the Channel 4 bid and the prospect of HS2.

She said: “The real winner is HS2, I would describe HS2 as the same when railways first arrived in our country, cities and towns.

“It has the potential to be that significant.”