DRIVING through some of Birmingham’s most densely populated Asian areas you sense there is unparalleled support for Palestine.
During the 22-day war protest meetings, talks and the urgency for aid were rife, but for one man the need to create a lasting image about a territory thousands of miles away was ever more crucial. Mohammed Ali, a well known graffiti artist from Birmingham, is writing his own history on the walls of the UK’s second city.
‘Wiped off our TV screens, but not from our Hearts’ is just one slogan on a mural created by Mohammed in response to Israel’s military action against Gaza. A total of four murals have appeared on walls across the city, and the number is sure to rise.  But walls aside, Mohammed has also lent his artistic talents to a van – the Viva Palestina Graffiti Van to be exact – which will be filled with aid and sent to Gaza as part of a convoy organised by Respect MP George Galloway.
Here Mohammed speaks to The Asian Today about his ‘Free Gaza’ Murals… 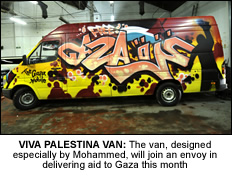 “Most people who know my work and have followed it over the past 5/6 years will know that my murals and canvas have always been focussed on concepts which are universally appreciated by people of all faith. Concepts such as peace, knowledge, patience, unity and brotherhood are often the preferred themes, positive virtues which I feel need to be shared and appreciated by all, something we, unfortunately, do not speak enough about, and virtues which are fading away from our modern societies.
During the past few months, we have seen on our TV screens the Israeli bombardment on Gaza. We have seen how the world watched on as over a thousand people were killed many of them children. As a father myself, it shocked me how little was being done to stop this crime – a crime against humanity. So this is why I chose to paint murals that highlighted the situation of the people of Gaza, as well as for the people of Palestine as a whole – as we know this is nothing new for the people of that land.
This was not just a ‘political’ mural, which was different from the murals I am known to do, but rather a continuation of those murals, a logical progression. The murals that I often do, speak of qualities of ‘truth’ and qualities which all people can feel. What is happening in Gaza is a concern for the whole of humanity, and is something that is binding us together, as people of all faith and background speak against the atrocities which are taking place. So this is why I feel these recent murals are no different. They are the feelings which represent all communities including Muslims, Christians, Jews… we speak against these crimes where innocents are killed.
So on behalf of all people who stand for good, all people from the UK that are against the killing of innocents, let the walls that are popping up around my city, scream the words “Free Gaza” and speak to those that don’t know, and remind those that are forgetting, as we see the news of the people of Gaza fade off our TV screens….

I have received much support from people who are from Gaza, as well as those who have family there. They have sent beautiful kind words of support, and been overjoyed with the support that they can see from the other side of the world.
I have painted four walls in the city of Birmingham, the second city in the UK, and have been helped by the young people of the city, many of which are from different faith. So to the youth that have helped me, your efforts have not been in vain, as the people from around the globe have seen these vibrant walls through photos and video found on the web – the word is spreading.
I received a message from someone on Facebook today. It said: “I want to tell you that many brothers from Palestine felt gratitude for your work and say we love you for the sake of ALLAH. I’m not Palestinian but I wanted to deliver this message”
And to the people of Gaza I say, I have not been able to do much, but God has given me an ability to transform our cities into pieces of art and communicate with people. So this is all I can do for now.”
For more information on Mohammed Ali and to view his work log onto www.aerosolarabic.com