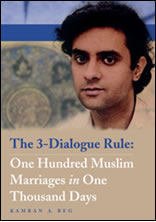 Three years ago a Manchester man began writing a book in the hope that it would help British Muslims find the partners of their dreams. Fast-forward to today and author Kamran A Beg is basking in his achievements. His newly published book ‘The 3-Dialogue Rule: One Hundred Muslim Marriages in one Thousand Days’ details a successful concept that has led to over 150 marriages within the British Asian community.
A former management consultant, Mr Beg has dedicated the last three years of his life organising matrimonial events for Muslims across the world. But what makes these events interesting is the framework in which prospective couples are brought together.
Mr Beg’s infamous ‘3 Dialogue Rule’ operates within a ‘halal’ framework where dating is a no-go area and family involvement is a must.
While some may find the concept too traditional and outdated, the statistics that back-up the dialogue provides an interesting window on how marriage is viewed by some British Muslims.
“The 3-Dialogue Rule distinguishes between marriage-inspired dialogue between a Muslim male and a Muslim female which is Islamically-viable, and dating, which is not”, Mr Beg tells us.
“It also stresses the need to involve the families of the two parties as soon as possible after an introduction has been effected as it testifies to the notion and empirical observation that the longevity of a marriage within the Muslim community is not just based on the degree to which a man and a woman are compatible.
“A marriage is more likely to the sustainable if both the individuals and their families are compatible,” he adds.
While Muslim customs and perceptions about matrimony seem to be changing in the Islamic world, and while modern British Muslims may find it difficult to comprehend their parents having a direct say in their future marriage , Mr Beg’s almost ‘back to basics’ formula seems to be working with 150 marriages to date.
Of those, 122 have emanated from the events programme, ten from an online service and 18 from a marriage bureau.