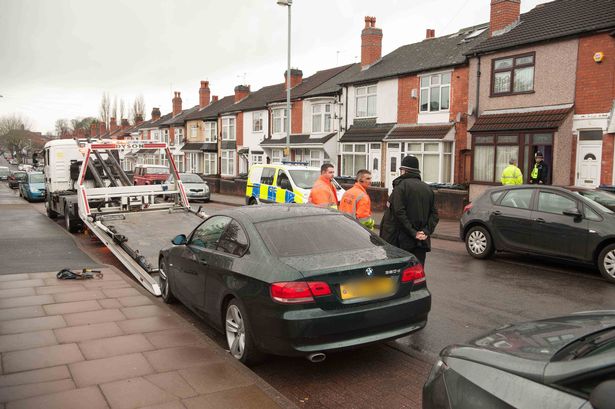 City enforcement officer tow two cars after being caught for fly-tipping. The cars have been caught on CCTV cameras sited near to fly-tipping hotspots.

The owner of a black BMW from Small Heath was almost in tears as city council enforcement officers and police arrived with a breakdown recovery truck.

The man argued with the officers as neighbours watched on as the luxury car was carefully winched onto the truck and taken away from road.

The second car, a grey Citroen Xsara Picasso, was seized from outside a home in Winson Green from across the road where fly-tipping has been a major problem.

Head of the waste enforcement unit Tony Quigley said: “We identified two vehicles and to further our investigation have had to come out and take them.”

He said that they will ensure that the cars are the ones spotted on CCTV and seek other links to the footage.

“Hopefully the rightful owner will come forward and we will interview them,” he added.

Enforcement teams use a mix of visible and hidden CCTV cameras at known hotspots to catch people turning up to dump rubbish.

They stand the best chance of securing a conviction where both the car or van number plate and person tipping the rubbish can be identified.

Officers over the last 12 months have caught and taken prosecution action for 50 different incidents of fly-tipping at a single hotspot.