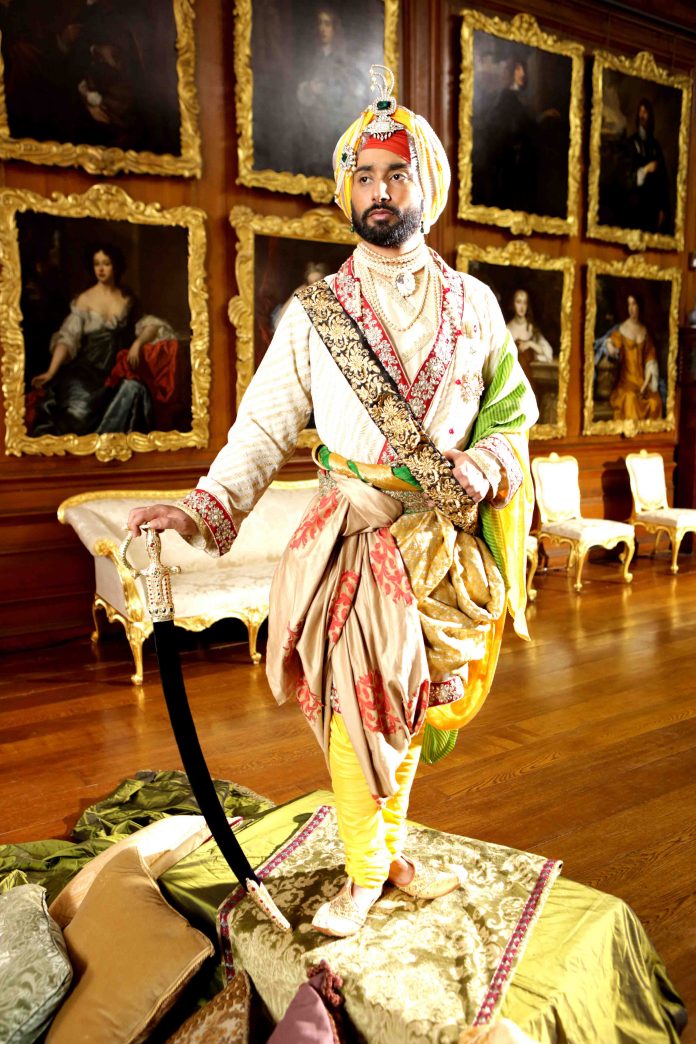 German-based music company Caldera Records has acquired the rights to the sound track for THE BLACK PRINCE, the historical drama about the last king of Punjab starring popular Sufi singer/poet Satinder Sartaaj in the title role, and written and directed by Los Angeles-based filmmaker Kavi Raz.

Written by composer George Kallis, the film’s colorful score was recorded live by the Hungarian State Orchestra earlier this year and has since attracted the attention of appreciative film festival audiences around the world.

With THE BLACK PRINCE, Kallis, who has composed scores for more than 20 motion pictures in addition to Emmy and BAFTA award-winning television programs, delivers one of his most memorable efforts to date. The Caldera Records CD release, which was produced by Stephan Eicke and John Elborg, also features a detailed booklet of text by Gergely Hubai, with elegant artwork by Luis Miguel Rojas. T

The very first English-language film about the poignant life story of the last King of Punjab, Maharajah Duleep Singh—also known as THE BLACK PRINCE—will be released in cinemas on July 21.  Produced by Brillstein Entertainment Partners and filmed widely across the U.K. and India, THE BLACK PRINCE carefully captures the tragic yet fascinating true story and legacy of the revered maharajah, providing a visual narrative of one of India’s noblest kings and his fragile relationship with Queen Victoria, the godmother to his children. The film, which traces a pivotal piece of Sikh history, was also made with additional financing from the U.K., India and Canada.

Satinder Sartaaj marks his acting debut in THE BLACK PRINCE, playing the role of Maharajah Duleep Singh with quiet strength. He is joined by an esteemed cast of acting stalwarts including Jason Flemyng (Lock, Stock and Two Smoking Barrels, Snatch) as Dr. Login, the foster parent for the Maharajah; English stage, screen actress Amanda Root (The Iron Lady), who boldly portrays the role of Queen Victoria; and veteran actress Shabana Azmi (City of Joy) as Rani Jindan, the exiled King’s mother.

In anticipation of its worldwide release, THE BLACK PRINCE has won several awards, including the award for Best Drama Feature at the L.A. Film Awards; the Special Jury Remi Award at the 50th Annual WorldFest International Film Festival in Houston, and the Best Male Debut Award for Satinder Sartaaj at the London Independent Film Festival.

In recognition of the exciting response and interest the film has received from various festivals, THE BLACK PRINCE has garnered interest from a range of new territories including Germany, Singapore, Kenya, and the U.A.E., in addition to the UK, Australia, India, and the United States.

As the last King of Punjab, THE BLACK PRINCE chronicles Maharajah Duleep Singh’s lifelong struggle and daring journey of self-discovery in order to reclaim his identity, his faith, and the Kingdom that was rightfully his. This ultimately leads him to meeting his mother, long herself in exile, after 13 years.

THE BLACK PRINCE spotlights Queen Victoria’s warm relationship with Maharajah Duleep Singh as he begins adjusting to and ultimately embracing the English culture into which he was drawn at the age of 15. The film also sheds light into his upbringing as an aristocrat in the UK who converts to Christianity under the influence of his foster parents, but later longs to return to his Kingdom, mother and roots.

His character, as it evolves is torn between two contrasting cultures – his royal ancestry from the Kingdom of Punjab as its last King, set against his upbringing in the UK as he embarks on a new journey of exile, away from his mother.

THE BLACK PRINCE is also poised to create a wave of intrigue in India and the UK as the story touches upon the historically significant and priceless Koh-I-Noor diamond, which was purportedly gifted by a young 13-year-old Maharajah Duleep Singh to Queen Victoria at a ceremony held in 1850 at Buckingham Palace in London.

The Black Prince releases internationally in cinemas on July 21st, 2017.