Home Desixpress Are You Guilty of Skin Toned Stigma? 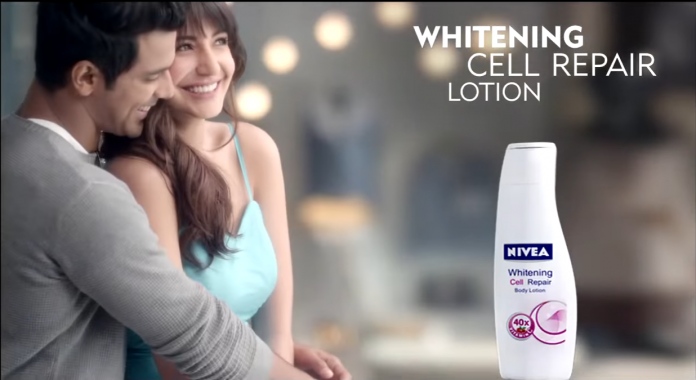 Are you fair skinned? There’s a fair chance that question either ignited a source of pride or anger in you, and for good reason. For centuries upon centuries now, asian communities have largely considered those with fairer skin to be the more beautiful members of society.

In the days of old, the poor worked manual labour out in the sun, whilst the richer members of society took shelter in the shade and retained a lighter skin tone. Naturally, the wealthy were more desirable and were sought after for marriage and proposals, and fair skin became a physical clue or indicator of wealth. Over time, despite changes in professions, technology, sexuality, and virtually all other facets of society, this one notion has still held true: to be more desirable, you must be fair.

the wealthy were more desirable and were sought after for marriage and proposals, and fair skin became a physical clue or indicator of wealth

The same can be seen in communities all across the East: India, Pakistan, China, Africa and more. But given that it’s now 2017, why have we not yet shed such beliefs on beauty? As with everything popular culture, one can often look to celebrities for answers. Despite today’s Bollywood stars being vocal on nearly every topic: from politics to mental health, homosexuality to caste, there is still very, very little talk on fairness. In fact, there is still active promotion of the fair skin ideal.

It’s no wonder the most highly praised actors are light skinned: Katrina Kaif, Kareena Kapoor, John Abraham. Meanwhile, the darker skinned celebrities turn to skin lightening, skin bleaching and whitening creams, and in some cases, even advertise for them- an issue infinitely more problematic. One such example is Priyanka Chopra who advertised for Garnier’s Fair Lightness Moisturiser and other creams. Additionally, despite being Miss World and now a globally recognised actress, Chopra still receives criticism for her naturally darker skin tone.

I was the darkest, so in jest my family called me kaali, and I never really understood how much that affected me until I was a teenager.

In a recent interview with the Guardian, she revealed her regret for endorsing such lightening creams and the implicit idea behind it. “I got swayed into doing it, but then I realised it made me feel like I did as a kid – I used to try all those products until I became Miss India.” When asked if she wished she was naturally lighter, she nodded. “It really works on your psyche, man. We don’t realise it, but it does. I was the darkest, so in jest my family called me kaali, and I never really understood how much that affected me until I was a teenager.”

Unfortunately, celebrity endorsement of lightening creams are not going to stop any time soon, perpetuating the idea that lightness is something to strive for. And darkness, no matter how natural and beautiful, is not. Most recently, Abhay Deol spoke out on skin whitening, when he posted to Facebook:

“There’s a lot more of these campaigns that are blatantly, and sometimes subtly, selling you the idea that whiter skin is better than darker skin. No one at the top of their game in any field is going to tell you that it is demeaning, false, and racist.

There’s a lot more of these campaigns that are blatantly, and sometimes subtly, selling you the idea that whiter skin is better than darker skin.

“You have to see that for yourself. You have to stop buying into the idea that a particular shade is better than others. Unfortunately if you look at matrimonial ads you will see how entrenched in our psyche this belief is.

He continued: “We even use the word ‘dusk’ to describe the colour of someones skin! While an individual may not be able to change this attitude in his/her community, he/she can at least start with the family.”

Deol held back no punches, and pointed out numerous stars and their ads, from Arjun Rampal to Shah Rukh Khan to Deepika Padukone, with scathing and sarcastic comments driving home the hypocrisy and denial surrounding such celeb ads. 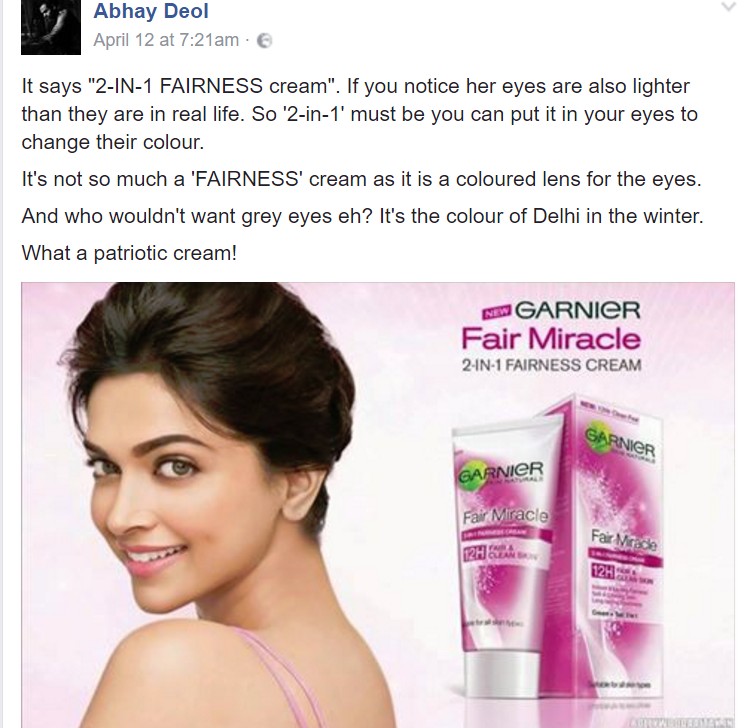 Arjun Rampal, who received criticism for his endorsement of supposed whitening creams, voiced his opinion: 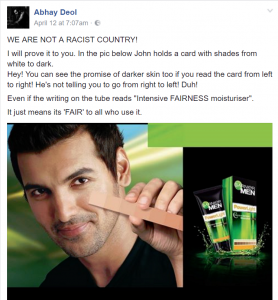 “I agree with Abhay, I believe every colour is beautiful. I don’t understand why this misconception of me endorsing a fairness cream. I endorse Nivea products for men.

“There is a face wash in that category that works very well on dark spots primarily pigmentation. Which occurs due to skin damage in the sun.

In fact all my commercials underline the fact that we aren’t selling fairness face whitening cream or any product.” 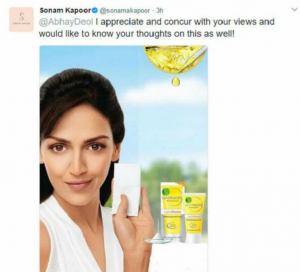 Sonam Kapoor also tweeted a response to Deol, saying, “I appreciate and concur with your views and would like to know your thoughts on this as well!” and included an image of Esha Deol -Abhay’s sister- and her skin lightening advert for Garnier.

She also brought to light her own past skin lightening adverts, saying:

“I shot this campaign ten years ago and didn’t understand the ramifications. Thank you for bringing this to the forefront.”

It’s far past the time Asian communities around the world dropped the skin tone stigma. No matter how much we shield ourselves from the sun, how much we slap on the latest Lightenex, there’s no changing that we are who we are and our skin is what it is. Instead, Asians everywhere should take up the mantle that all skin and all shades are beautiful, lest their own kids be subjected to the same stigma as those from the days of old.