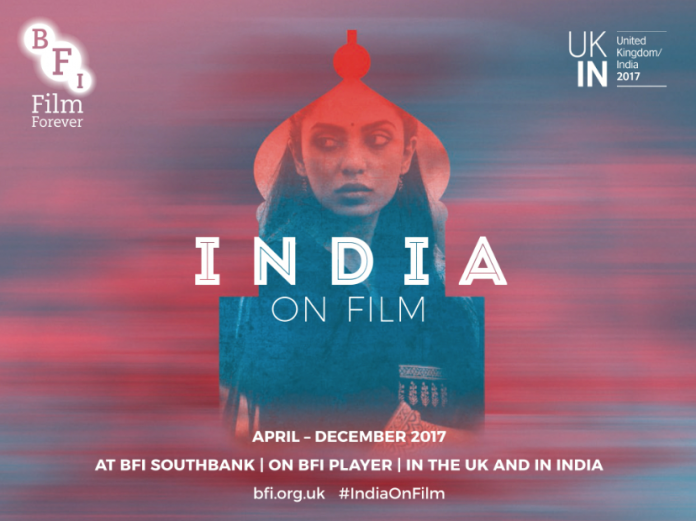 As part the UK India Year of Culture, the BFI has embarked on a celebration of Indian film throughout the rest of 2017. Co-curated by BFI Head Curator Robin Baker and writer and programmer Meenakshi Shedde, the BFI’s India on Film programme is running at BFI Southbank from April – December 2017.

The programme has kicked off this month at BFI Southbank with Bollywood 2.0, a focus on ‘New Bollywood’ films which have pushed the boundaries of conventional Bollywood filmmaking by combining song and dance numbers with more realistic stories that tackle issues such as caste, crime, homosexuality and feminism. The films in Bollywood 2.0 have been acclaimed at festivals worldwide as well as finding large audiences in India and overseas.

Running alongside the India on Film programme at BFI Southbank from Friday 14 April through until December, The Art of Indian Cinema is a free exhibit of stunning posters and other promotional material drawn from the collections of the BFI National Archive, immersing visitors in the colour, spectacle and artistry taken from the golden age of Indian cinema art.

Screening in April will be crime thriller Raman Raghav 2.0 (Anurag Kashyap, 2016), based on a real-life serial killer, who confessed to killing over 30 people in Mumbai in the 1960s. The film, by cult filmmaker Anurag Kashyap, ‘king’ of Indian indie cinema, was selected at Cannes in 2016.

Three stories intersect by the Ganges in Neeraj Ghaywan’s superb debut feature, Masaan (Neeraj Ghaywan, 2015), which won two prizes at Cannes, while Shahid (Hansal Mehta, 2012) is a powerful thriller based on the life of Shahid Azmi, the Muslim human rights activist and lawyer who freed many poor people, including Muslims, languishing in Indian prisons without evidence of their crimes.

The poignant Kapoor & Sons (since 1921) (Shakun Batra, 2016) redefines the traditionally saccharine Bollywood family with a story of a dysfunctional family grappling with homosexuality, parental infidelity and death; Chaitanya Tamhane’s debut feature Court (2014) is an art house film that redefines what a Bombay film in Hindi can be and it deservedly won top prizes at Venice in 2014.

Completing the programme is April is Queen (Vikas Bahl, 2013), a delightful film about a traditional young Delhi woman who is stood up by her fiancé on the eve of her wedding. She decides to honeymoon in Europe alone, and finds that her adventures make her more confident, liberated and less judgmental.

India on Film continues at BFI Southbank in May with Music in Indian Cinema: Song and Dance.

Watch the trailer of India on Film here: