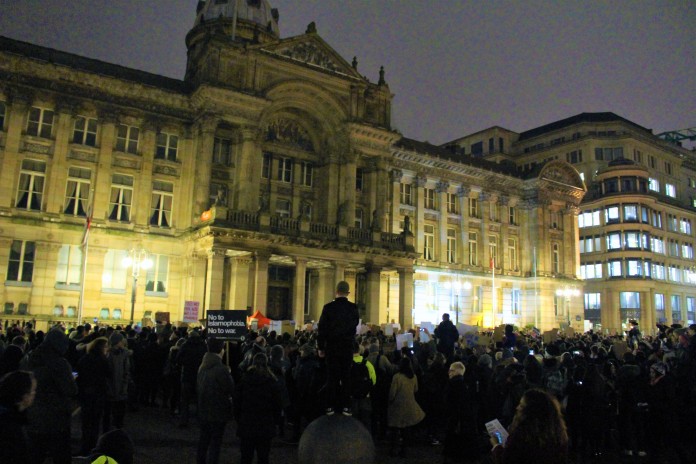 January 30th saw more than five hundred people gathered in Victoria Square, Birmingham, to protest against the Trump ban and his proposed state visit. Hordes of protesters turned up outside the Council House in defiance of the ban which would see muslims and immigrants from Iraq, Syria, Iran, Libya, Somalia, Sudan and Yemen barred from entering the United States.

Although Theresa May was able to strike a deal with Trump exempting Brits with dual citizenship with those seven countries, her extension of an invitation of a state visit for the billionaire president has been met with huge backlash.

Over a million people signed a petition calling the revocation of the invitation, which May refused to submit to on the grounds of it being a ‘populist gesture.’

In response, protests were held in several cities around the UK; Birmingham, London, Manchester, Newcastle and more.

The Birmingham protest was set up and chaired by 29-year-old Hasanain Jaffer from Kings Heath, who set up the Facebook event page. In only two days, the page attracted over 6,000 people with hundreds immediately confirming attendance. 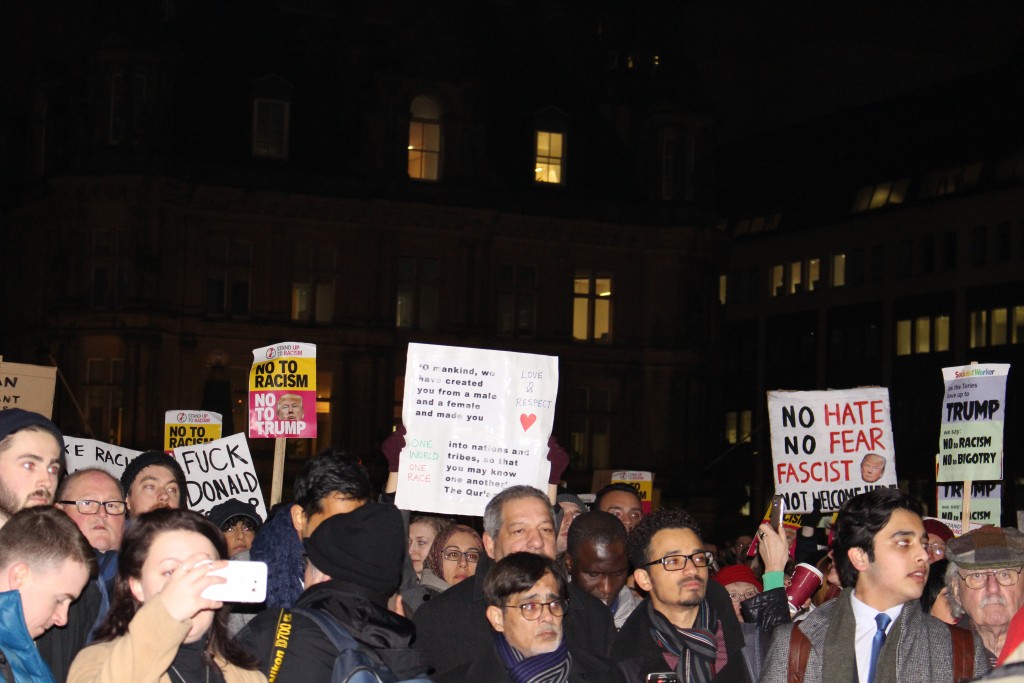 It was timed to coincide with nationwide anti-Trump protests and was supported  by Stand Up To Racism, Stop the War Coalition, MEND (Muslim Engagement and Development), the Muslim Association of Britain, Amnesty International, UNISON and the West Midlands Green Party.

We spoke with some of the protesters at the Birmingham rally. One person called the Trump ban ‘disgraceful.’ Another said ‘spouting hate, especially Islamophobia, and blaming a whole religion for the actions and views of certain extremists is a bit farfetched and it’s history repeating itself.”

Flags of the UK, LGBTQ, the EU and even communism were on show. There were multiple signs and boards denouncing Trump, racism, hate crime and division.

Some of the speakers at the rally included Val Harrison, chair of Birmingham Progressive Synagogue, who said “there is far more that unites us (Muslims and Jews] than divides us. We are people who know what happens when authority chooses a group as a scapegoat and then turns on them. History teaches us that what starts with small steps can rapidly escalate into unimaginable suffering for the target group.”

Another speaker included Reverend David Butterworth, of the Methodist Church, who said: “Whatever we can do to make this a more peaceful city and a more inclusive city, and to stand up and be counted, we must and should do it together.

“The only way that Donald Trump will win is if the good people of Birmingham, and of other cities that we’re twinned with like Chicago, stay silent.”

Shami Chakrabarti, the Shadow attorney general, said: “It is in sadness and solidarity that we gather here this evening. I also hope, friends, that we stand here in solidarity with all the world’s women who the president has insulted and all the desperate refugees that he would spurn.”

“It is in sadness and solidarity that we gather here

this evening. I also hope, friends, that we stand

here in solidarity with all the world’s women who

the president has insulted and all the desperate

refugees that he would spurn.” 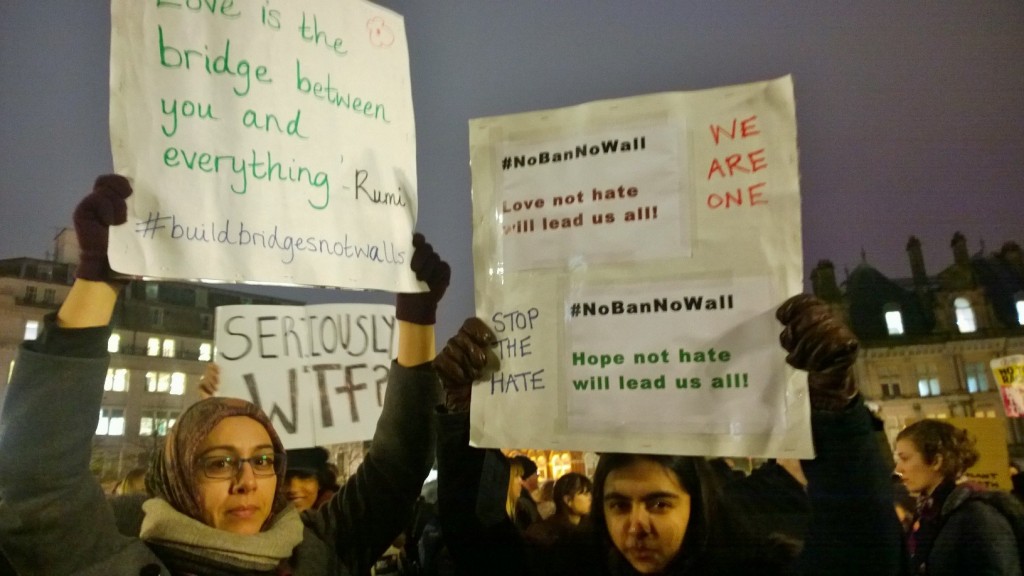 Should Trump be allowed to go ahead with the State visit, it may signal to some that the UK is in agreement with the ban- which many politicians have denounced as illegal and cruel- Despite the nationwide protests, Theresa May is still adamant about allowing Trump to visit on a State visit (which would see him hosted by the Queen and staying at Buckingham Palace).

May was branded ‘Theresa the Appeaser’ by MPs in the Commons, with Labour’s Yvette Cooper even going so far as to say: “This order [anti-immigration ban] was signed on Holocaust Memorial Day. For the sake of history, have the guts to speak out.”

“This order [anti-immigration ban] was signed on

Holocaust Memorial Day. For the sake of history,

have the guts to speak out.”

However many have ridiculed the petition, adding that a state visit by Trump would bear no embarrassment to the Queen who in the past has hosted such dictators as Robert Mugabe and Nicolae Ceaușescu.

Former US president Barack Obama has also voiced concern, saying that he ‘fundamentally disagrees’ with the discriminatory ban.